Use These 8 Cognitive Biases to Hack Your Conversion Rates by Up to 1,826% 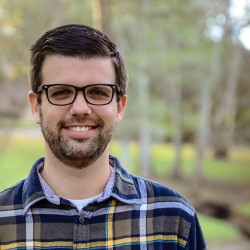 We’ve all heard it a thousand times: get inside the mind of your customer if you want to be successful. This is the key to boosting your conversion rates.

So we read customer feedback, observe their behavior, and do our best to understand their preferences, but we often overlook one very important aspect that’s universal to all potential customers—they’re humans.

They all have a human brain.

And we (as a society) know tons about the human brain, especially when it comes to decision making. The color yellow makes us hungry, our friends influence our decisions, and large walls of text make us queasy.

There are dozens of psychological principles that help explain the “why” behind our decisions, and (spoiler alert!) we rarely use logic to make a purchase. We call this a “cognitive bias,” when people do things that aren’t entirely rational because of certain circumstances or context.

These cognitive biases can be used to hack your conversion rates.

In this post, we’re providing a list of psychological hacks you can use to provide an irresistible experience that will boost your conversion rate and charm the pants off your prospects and customers.

In its simplest form, confirmation bias is the practice of seeking, understanding, and remembering information in a way that aligns with a preexisting opinion. Sometimes referred to as the “blind spot,” it’s the reason we miss obvious clues or buy things that may not be the best solution. Most humans succumb to confirmation bias regularly, as it takes a significant awareness to recognize it in the moment.

When it comes to conversion rate optimization (CRO), this is not something you want to try to fight—it’s something that can work in your favor.

Confirmation bias can also be used in several different ways to impact conversions and completions. For instance, if your customer data shows that most customers are drawn to a particular benefit, such as software integrations, hammer that point home in your landing page copy, even if you don’t feel that’s the strongest benefit your product offers.

Why? Because you can always elaborate on what you believe is your core benefit, such as time savings, but you’ll never get that chance if you don’t provide some proof that you can solve the problem your customer is researching.

But, there’s something deeper here, too. As humans, we use confirmation bias to cherry-pick information that reinforces a narrative or idea that we already have.

This tells us a couple of things that impact conversions: 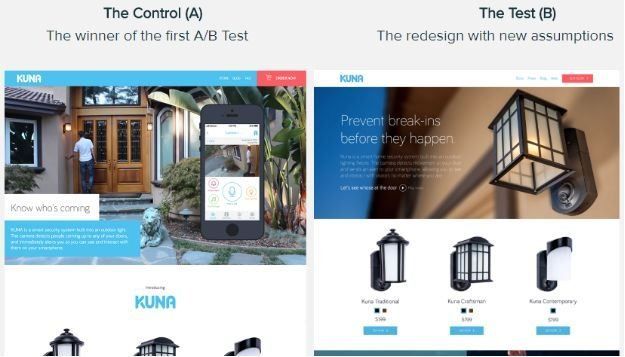 This last point is particularly important when it comes to copywriting for landing pages, web forms, quizzes and surveys. You’ve gotta know your audience and speak their language. If you don’t, you’ll create a feeling of cognitive dissonance, which is exactly the opposite of what you want.

In one example, home security company Kuna was able to increase their conversions by 89% by updating the messaging on their homepage to better align with the language that customers used.

This is what happens when an overly excited waiter lists off the specials at a restaurant. After the fourth or fifth dish he lists off, you get a feeling of being overwhelmed and tell him the at you need a minute to decide. In fact, you can’t even remember the first one.

In a restaurant, this is no big deal. You can always order something else, ask him to repeat the list, or look for a whiteboard to remind yourself.

When you’re trying to get a faceless web visitor to buy your products online, providing too many choices could be the death knell for your conversion rate. An online checkout 15 different options with indistinguishable differences are less likely to be purchased than one with only three. 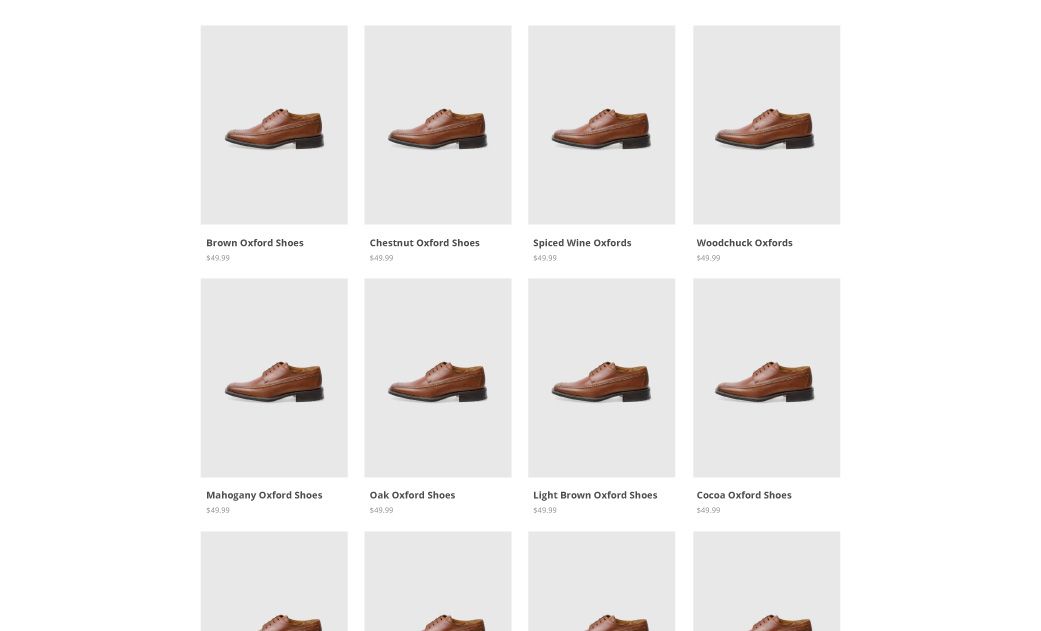 In a seminal study on choice overload, researchers from Columbia University found that when shoppers were presented with 24 different types of jams, only 3% actually made a purchase. In contrast, when there were just 6 options, 30% of shoppers made a purchase. That’s a 900% increase in conversion rate!

Yes, the adage “less is more” definitely applies to boosting your conversion rate. Here are some more examples of choice overload to help you avoid falling into the trap.

If “everyone is doing it,” it makes it a lot easier for people to rationalize joining in. In this viral video of a shameless dancer slowly attracting a crowd, note how reluctant the first few are to join him, and how they start running over en masse once the crowd has been established.

This is known as the bandwagon effect. 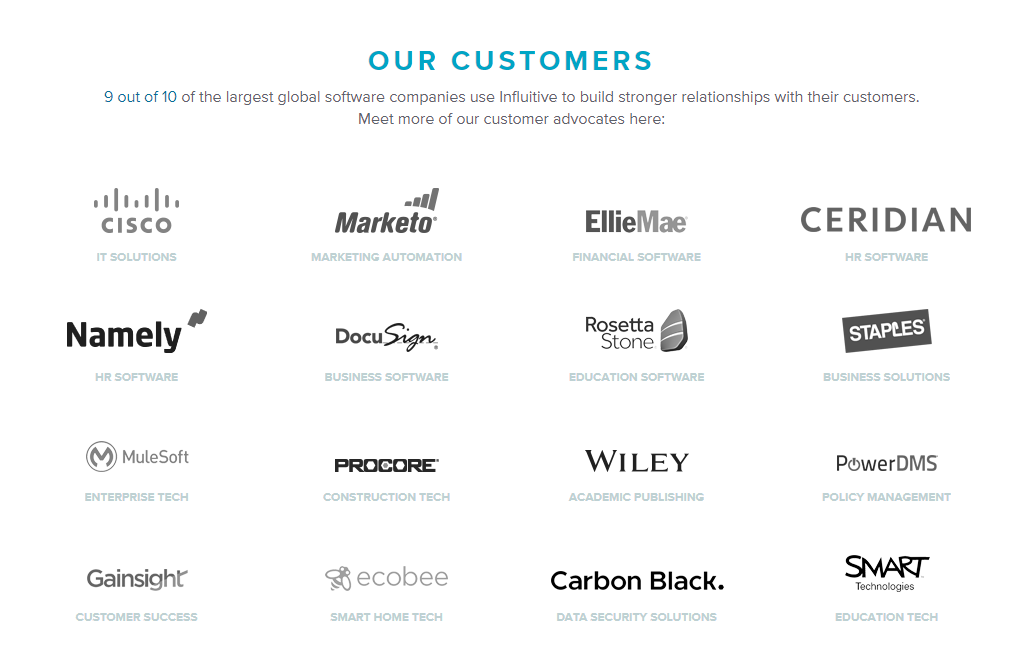 In the wild, we see it as testimonials or big-brand logos that are meant to ease the visitor into feeling comfort and trust toward the company.

One case study found that adding celebrity endorsements to their page led to a 60% boost in conversions.

We’re programmed to respond more strongly to negative situations than positive ones. When you need somebody to act in the moment, which generally means relying on emotion rather than logic, negativity can be incredibly powerful.

Consider the infamous A.S.P.C.A. television ads featuring Sarah McLachlan—would the campaign have been as successful if they had shown happy dogs and cats being adopted, as opposed to the tear-jerking visuals of neglected animals in cages?

According to the psychological principle of negativity bias, definitely not.

Are we advocating the use of sad animals on your forms and landing pages? No, but it is worth considering framing your benefit in a way that highlights the negativity of allowing a current situation to go on without the product or service you’re selling.

Consider the difference between:

“Do you want to keep banging your head against your desk trying to figure out Microsoft Excel, utterly embarrassed when your boss asks you to put together a pivot table?”

“Our new course will have you creating pivot tables like a pro!”

Which is more compelling to register for an Excel course?

If you’re like most people, it’s the former. The negative image sticks in your head. You’re drawn to it and want to avoid it. This is also closely linked to loss aversion, which has been carefully studied. One experiment found that participants were 42% more likely to take an action in order to avoid loss than to secure a gain.

When we’re trying to sell something, we must always remember to anchor the price. Take the classic Steve Jobs keynote presentation introducing the iPad. He mentioned that while his team was pricing the product, it needed to come in under $1,000, “...which is code for $999.”

He then announced the iPad is only $499, which seems comparatively cheap to the $999 price anchor he just put in everyone’s head.

Note: The "Control" above was an old version with different copy. Variation A and B both used the same (new) copy, but tested the inclusion of the "Gold" option. The calculated uplift is the difference in performance between Variation A and Variation B.

In terms of pricing, the decoy effect is somewhat similar to anchoring, yet even a bit more crafty. As opposed to simply offering a more expensive price, as in the anchoring example above, the decoy effect actually requires you to come up with a product/price point that very few people will actually take, which pushes them toward the price you actually want them to pay.

Wait, what!? That sounds so devious. Well, kind of. But consider this example from The Economist. Here are its three pricing tiers: 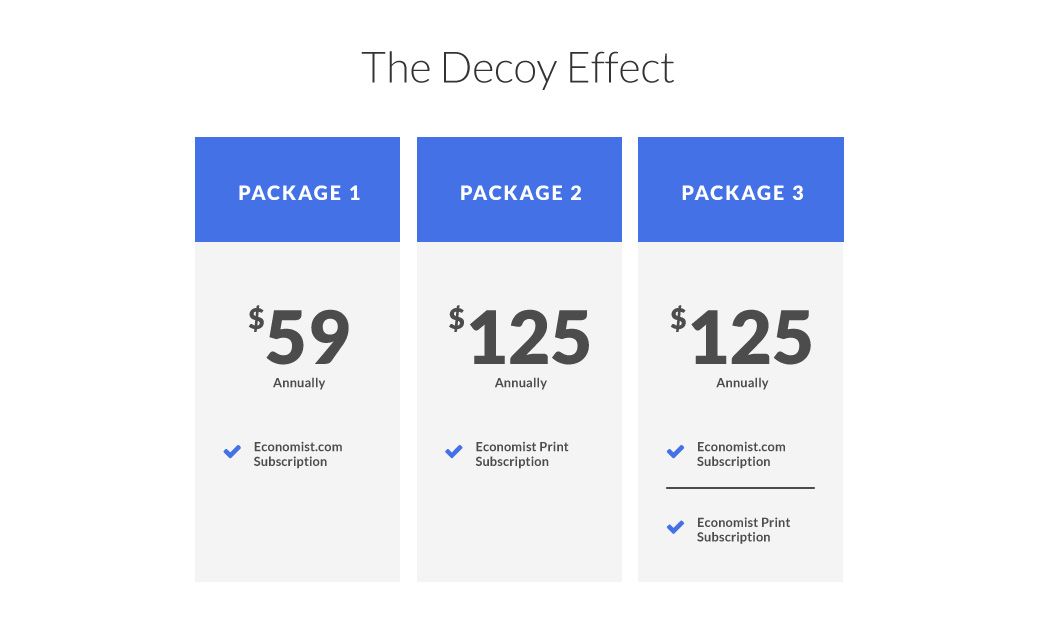 You’d have to be a fool to buy the print-only subscription, as it’s the same price as the combo deal—you’d be paying the same and getting less! The print + digital subscription is clearly the better value!

And that is the decoy effect.

In an MIT study on the Economist’s pricing structure, they found a 525% increase in the popularity of the more expensive package by including the second package versus only having two options.

You’re essentially giving people 2 choices, but making one seem like an obvious rip-off.

By comparison, the choice you really want them to take seems all the better.

Since we’re on the topic of price, it’s worth mentioning what people will pay more for.

Hyperbolic discounting explains that people prefer an immediate payoff (even if it’s small) rather than a larger gain later on. No wonder “7-minute abs” sells so much better than the truth of working out steadily over time and dieting!

But you don’t have to use this technique with scammy, inflated sense of urgency; it’s more about how you position what your product or service can deliver. According to hyperbolic discounting, saving “5 hours per week” is more compelling than saving “11 days a year”, even though they equate to the exact same amount of time savings.

Basically, people are really quite bad at delaying gratification.

By framing benefits based on their short-term impact rather than long-term advantage, you could see a major lift in conversions. Likewise, you can also tap into the effect of hyperbolic discounting by showing a lower daily or monthly price compared to a higher annual cost.

Lasik surgery, for example, generally costs thousands of dollars. To most people, it’s just too expensive. But when you use hyperbolic discounting to put that price in context, it seems much more realistic.

We all know the classic, “less than a cup of coffee per day,” line. It works because of this cognitive bias.

This effect can also be used in a number of other ways to nudge people to convert in order to receive instant gratification. Smiley Cookie, for instance, found that adding a small banner to their page that read “Order Today —> Ships Next Business Day“ boosted their conversion rate by a convincing 41%.

“Hey guys, have you heard the one about…”

Assuming we don’t butcher the joke, humor is a pleasant experience for all involved. But it’s not just for cocktail parties—humor has a huge effect in marketing and conversion.

Why? Because when something is funny it’s easier to remember!

Brands like Dollar Shave Club and Squatty Potty proved that humor can have a huge effect on sales. Empirically, Copy Hackers ran a test to see whether straightforward copy or humorous copy would perform better on a landing page.

In their experiment, they found that the humorous variation led to an 18% lift in overall conversions. But it is worth noting that they added some footnotes to their test—sometimes humor just isn’t appropriate in the context, so be sure to use it with caution.

There are tons of technical and design tactics you can leverage to encourage people to fill out your forms or make those sales—we have posted lots of examples on our blog. But when you pair your form execution with knowledge of the psychology behind decision making, that’s when you can slap that “S” on your chest and become a conversion rate superhero.

Ready to put these cognitive biases to the test? Create beautiful, high-converting forms, surveys, and landing pages with Paperform.

Did I mention that everyone is doing it? ;-)

Creating A Paperless Office: 6 Solutions To Get You Started

Thanks to the evolution of tech, your journey to becoming a paperless office doesn’t have to be a hard one.

4 Types of eCommerce Emails To Send To Millennials

There’s always a risk, but plenty of reward if you’re sending out the right emails to your Millennial audience.

In light of COVID-19, many businesses will increasingly rely on online solutions to make sales. Now might be a good time to move your bakery business ...

Whether you're running business-as-usual or have paused operations temporarily, there is plenty you can do to ensure that your audience remains as eng...